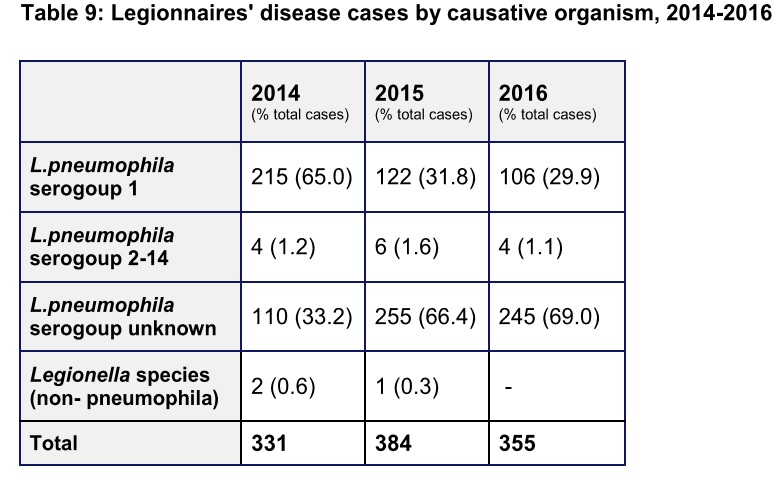 Clearly in 2016 only 29.9% of cases are confirmed as Legionella pneumophila serogroup 1.. The most common method of testing, the urinary antigen test as seen in the chart below, was subject to a recent PHE document that stated “PHE has been made aware of potential discrepant results between clinical and reference laboratory Legionella pneumophila urinary antigen testing. The proportion of referred urines that are confirmed as positive has reduced. Between January – March 2017, only 63.2% of urinary samples reported as positive locally were confirmed by the reference laboratory, compared to 81.3% during the same period in 2016.”

This shows that the urinary antigen test was 81.3% “correct” at the time of the chart above but has reduced in its “confirmed positives” lately.

In the end you may argue it doesn’t matter as in the UK we treat all Legionella as the same when trying to eradicate it environmentally. But it is interesting that we have built a picture of a cause that may be reliant on 29.9% of results. Certainly in Australia and New Zealand this certainty would not stand up as Legionella longbeacheae is a major cause of Legionnaires’ disease there with approximately 30% of all cases.

Where it affects us is in the training we offer end users so be aware of the statistics in case you get a delegate on a training course who has read this post.

If you would like to know more about Legionnaires’ disease and its prevention why not contact Collaton Consultancy Limited on general@collatonconsultancy.com or +44(0)7958 124563.

Nigel Richardson is an expert witness for causation relating to Legionella, he is also an experienced water treatment, Legionella and Pseudomonas consultant and trainer for end users and water treatment companies alike helping companies comply with the relevant laws and guidance.

This site uses Akismet to reduce spam. Learn how your comment data is processed.

Contact us for further information on simplifying your complex Legionella needs